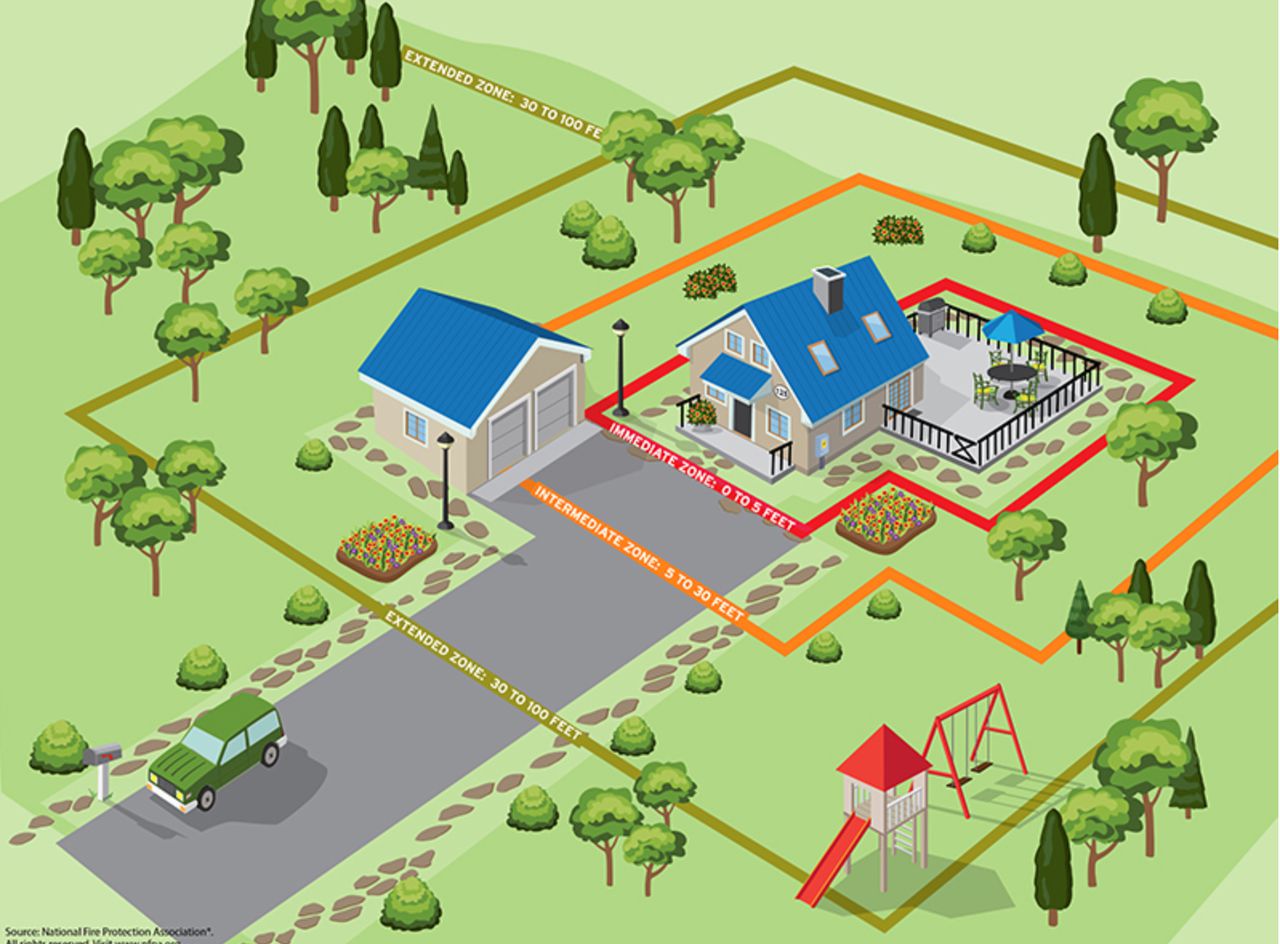 Ashland residents concerned their home isn’t ready to ward off a fire are inviting wildfire mitigation specialist Charisse Sydoriak to walk their property and show them how they can reduce the likelihood that a blaze will bring destruction.

One way to adapt to what Sydoriak considers inevitable wildfires: Low-flammable landscapes.

Careful selection, spacing and maintenance of plants growing safe distances from a structure can be lifesavers, whether in a wildfire-prone zone or not.

Homeowners who request a free fire-risk evaluation of their property through the Ashland Volunteer Wildfire Risk Assessment Program, which Sydoriak co-founded, aren’t obligated to follow the advice based on fire science. But many do.

They clear out woody debris, keep low-growing greenery in small clusters and look for fire-reluctant plants to replace combustible trees and shrubs such as arborvitae and juniper.

What are better alternatives to grow? Sydoriak has spent hundreds of hours researching fire-resistant landscaping options and discovered that “fire-wise” and “fire safe” plant lists have issues.

One of her concerns — “a major shortcoming,” she calls it — of all plant lists she’s seen is there is no standardized methodology for testing flammability or assigning plants to home ignition zones, closest and farthest from structures.

Home ignition zones, as defined by the National Fire Protection Association, are the immediate zone, which is the dwelling and five feet around it; the intermediate zone up to 30 feet beyond the home; and the extended zone, which is up to 200 feet away and might include the neighbor’s property.

Keeping trees, shrubs and plants confined within appropriate areas can prevent a fire from spreading, say experts. Danger increases if plants are dry, accumulate dead material and are too close to structures and other combustible materials.

Most fire experts agree that where plants are placed and how they are maintained are more important than the type of plant.

“All plants will burn given the right conditions,” says Sydoriak, who worked 35 years in fire and natural resources management.

Within five feet of a home, it’s best to only grow plants with high moisture content in containers that can be moved when wildfires threaten, Sydoriak says.

Concrete, stone and gravel walkways are also recommended to surround a house.

Certain deciduous trees and shrubs may safely be planted sparingly within the 10-to-30-foot home ignition zone.

Sydoriak’s investigations of plant lists have shown that species within the same genus do not necessarily have equivalent fire resistance, and size and growth form also influence the potential of a plant igniting.

As part of her useful living-with-fire.org website, Sydoriak has compiled a downloadable Plant List Generator, a work-in-progress database that allows people to see which plant species have been subject to flammability testing or have been identified as fire resistant by one or more respected sources.

Sydoriak says she started the fire-reluctant plant list project to know more and, in turn, to recommend smart replacements to homeowners after she suggests they pull out highly combustible landscape materials.

The timing to release her research couldn’t be better, as people are visiting nurseries to pick out new plants for spring while the destruction of recent Oregon wildfires is still seared in their memories.

Research has found that fire suppression work reduces the vulnerability of a home and the entire community.

The Oregon Wildfire Risk Explorer tool lets people put in an address and receive a general summary of home ignition zones, along with recommendations to dampen the potential of wind-whipped flames.

But the wildfire risk tool is not a substitute for an on-the-ground site assessment by a professional forester or fire personnel, according to the website’s disclaimer.

In Portland, property owners in wildfire hazard zones can request a wildland-urban interface home assessment, conducted by Portland Fire & Rescue, to learn specific tasks that could reduce fueling a fire.

Concern is not restricted to rural and forested areas. Many fires start accidentally in a kitchen, garage or next to a shed, drought and dropping moisture levels are drying landscapes, making urban yards vulnerable, and wind-blown embers can fly for miles, say experts.

Everyone should minimize flammable materials on their property — from dry vegetation to gas cans and oily rags — to make it less likely that flames spread to the neighbor’s house, say fire experts.

Fire services don’t have the resources to protect every structure. And the city of Portland can pass the full cost of controlling and cleaning up a fire to the person responsible.

“We can no longer expect to be protected from wildfire,” says Sydoriak, who talks about home ignition zones, not “defensible spaces,” which she says implies that the owner or firefighters can safely defend a property from wildfires.

“This is no longer a realistic expectation given the extreme wildfires we have been experiencing,” she says. “It’s better to focus your attention on doing wildfire risk reduction work on your property so that it doesn’t ignite or has lower potential of ignition.”

Knowing the recommended distance between a specific plant and an object susceptible to embers, surface flames or tree canopy fires lets property owners decide if it’s suitable for certain ignition zones near and far from structures.

Sydoriak has firsthand experience with plants, forests and fire. While based in California, she was a field botanist, pioneer fire-effects monitor, fire manager, wilderness impacts assessor and vegetation restoration specialist in Yosemite National Park for nine years, starting in 1980.

A promotion elevated her to the position of a regional fire management officer for the National Park Service and she retired as the chief of resources management and science at Sequoia and Kings Canyon National Parks in 2015. She moved to Ashland the next year.

She has since volunteered her time to facilitate broader understanding of the role of fire and the need to learn to adapt to life with wildfire in the face of climatic change, she says.

She was introduced by Brian Hendrix, the Fire Adapted Communities coordinator at Ashland Fire & Rescue, who says Sydoriak’s background in wildfire risk mitigation and ecologically focused landscaping allowed her to create a plant list that didn’t exist for this region.

Sydoriak made it clear to the gardeners, landscapers and nursery owners attending the lecture that her mission is to promote ecologically-functional gardens that have low flammability, wildlife value, regenerate soil health, require little water and are relatively easy to maintain.

Native plants, she says, are more likely to be adapted to local conditions and support native wildlife.

Sydoriak continues to expand her plant list database to add horticultural attributes a person might be searching for such as fire-wise plants that are also drought tolerant, pollinator friendly and deer resistant.

Her husband, Walter Sydoriak, who worked for the National Park Service and the U.S. Geological Survey, and is best known for illustrating the collectible book, “An Illustrated Flora of Yosemite National Park,” designed and programmed the online Plant List Generator.

The hope of their volunteer efforts is to make it easier, says Charisse Sydoriak, for people to “independently make informed choices.”

To help minimize the probability of fires spreading on your property, experts recommend removing plants that readily ignite or propagate fire, and abiding by plant siting guidelines based on home ignition zones.

Only plant what you can properly maintain, which is critical to mitigate fire risk. Keep the soil and plants vigorous and healthy throughout fire season

Grow plants that meet these criteria: